Reading the Eyes, Ears and Tail 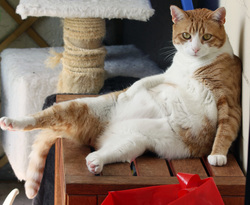 This means that cats really do not need a complex communication system with lots of nuances and signals.  When cats do meet, it is still important that they understand the signals of other felines, and it is important for humans to learn to interpret what their cat is trying to say.

Although cats do make sounds and use them to communicate, their body language is much more sophisticated and carries more information.  Many of the visible signals that a cat uses are not voluntary, but rather are due to physical effects that result when the cat expresses emotional states such as being relaxed, alert, friendly, tolerant, fearful, apprehensive, defensive or aggressive.  Much of the body language of cats simply is the result of their nervous system responding to changes in stress levels and sending messages that change a cat's posture and behavior.  That means that the majority of cat body language signals are universal and don't depend on the cat's personal history or learning experiences.

The most easily seen and interpreted cat signals are given by their ears and tail, although looking at a cat's eyes and body posture will provide additional information as to how excited or stressed he is.
Look Into His Eyes

Ear Direction
Because a cat's ears are pricked and stick up above his head when he is relaxed, they are easily seen and changes in ear position provide good signals of fluctuations in your cat's mood.  Cats have around 30 muscles that allow them to move their ears in many ways. 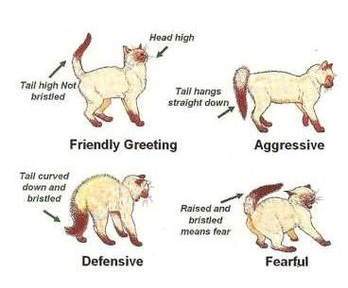 Tail position: The way the tail is carried is also important.  When you see a cat with his tail held straight up, or curved somewhat over its back, and not bristling or bushed out, you are observing one of the friendliest signs that the species ever offers - especially if the cat's head is held high.  The high tail allows another friendly cat to investigate the exposed region at its base.  Cats have scent glands around their anal region that provide pheromones that can identify the individual to anyone who catches the familiar odor.  Raising the tail is much like offering someone your passport or driver's license to verify your identity.

Bristling: Bristling in the tail is much like dilation of the pupils of the eyes in that it shows arousal or stress.  When a bristled tail is held straight down, this is an aggressive signal that is often seen when cats are about to pounce on something, signaling that they are annoyed or challenging another individual.  If the bristled tail is held down but curves up at the tip, the cat is feeling defensive.  As the cat becomes more fearful, the bristled tail will rise until it reaches that familiar "Halloween cat" vertical position.  Reading the height of a bristled tail will tell you just how worried or frightened the cat is.

Although the range of communication in cats is somewhat restricted, it does communicate a lot about what the cat is feeling and what he is intending to do.  Thus if your child is playing with Miss Kitty and her tail is now starting to lash back and forth, it is a good idea to call your child away and give the cat a break.  If you don't give your cat some space, you may soon need a trip to the medicine cabinet for bandages and peroxide!

Make manicures enjoyable and easy for both you and your cat.

Does your kitty disappear when the clippers come out? Do you have to wrap her in a towel to give her a manicure? According to our behavior experts, calm, enjoyable nail-trimming sessions are not only possible—that’s how they should always be! Check out the following tips for getting kitty to relax while you trim, turning nail-clipping sessions into enjoyable together time.


Setting the Mood
Ideally you should introduce your cat to nail clipping when she’s a kitten. Choose a chair in a quiet room where you can comfortably sit your cat on your lap. Get her when she’s relaxed and even sleepy, like in her groggy, after-meal state. Take care that she isn’t able to spy any birds, wild animals or action outside nearby windows—and make sure no other pets are around.

Make Friends with the Paw
Gently take one of your cat’s paws between your fingers and massage for no longer than the count of three. If your cat pulls her paw away, don’t squeeze or pinch, just follow her gesture, keeping in gentle contact. When she’s still again, give her pad a little press so that the nail extends out, then release her paw and immediately give her a treat. Do this every other day on a different toe until you’ve gotten to know all ten.

Get Acquainted with the Clipper
Your cat should be at ease with the sound of the clippers before you attempt to trim her nails. Sit her on your lap, put a piece of uncooked spaghetti into the clippers and hold them near your cat. (If she sniffs the clippers, set a treat on top of them for her to eat.) Next, while massaging one of your cat’s toes, gently press her toe pad. When the nail extends, clip the spaghetti with the clippers while still holding your cat’s paw gently. Now release her toe and quickly give her a treat.

Never Cut to the Quick
The pink part of a cat’s nail, called the quick, is where the nerves and blood vessels are. Do NOT cut this sensitive area. Snip only the white part of the claw. It’s better to be cautious and cut less of the nail rather than risk cutting this area. If you do accidentally cut the quick, any bleeding can be stopped with a styptic powder or stick. It’s a good idea to keep it nearby while you trim.

Time to Clip
With your cat in your lap facing away from you, take one of her toes in your hand, massage and press the pad until the nail extends. Check to see how much of a trim her nails need and notice where the quick begins. Now trim only the sharp tip of one nail, release your cat’s toe and quickly give her a treat. If your cat didn’t notice, clip another nail, but don’t trim more than two claws in one sitting until your cat is comfortable. Be sure to reward her with a special treat afterward. Please note, you may want to do just one paw at a time for the first couple of sessions..
Clipping Schedule
A nail-trimming every ten days to two weeks is a nice routine to settle into. If your cat refuses to let you clip her claws, ask your vet or a groomer for help.

What Not to Do
If your cat resists, don’t raise your voice or punish her.  Never attempt a clipping when your cat is agitated or you’re upset. And don’t rush—you may cut into the quick.  Don’t try to trim all of your cat’s claws at one time.  Do NOT declaw. This surgery involves amputating the end of a cat’s toes and is highly discouraged by the ASPCA. Instead, trim regularly, provide your cat with appropriate scratching posts and ask your veterinarian about soft plastic covers for your cat’s claws